A Hive of Activity

The ‘Old School’ is a much-used building in the Crosserlough area. It was built as a national school under the direction of Fr John Boylan in the mid-1880s and opened on 1st October 1886. It is situated in the townland of Cullow, on the Crosserlough to Kilnacrott Road, overlooking Cullow Lake. It continued in use as a school until the current school was opened in 1981.

Plaque on wall of the front gable of the ‘Old School’

Between 1999 and 2001, the ‘old school’ was renovated. While the ‘old school’ is no longer used as a place of formal education in the locality, it is still a centre of activity in the vicinity of Crosserlough. 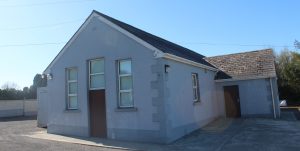 It is regularly used by the local community for drama productions, dancing classes, meetings, gatherings after funerals and many other events.